Please don't play with your food.....


I am a big fan of pumpkins. There are loads of different varieties from tiny Baby Bears to the enormous ones that are grown competitively. They're fun to grow, and great to eat in a huge variety of recipes; they can be roasted, spiralized, used in risotto, in pies, pastries and pasties, made into delicious soup and far, far more.

But what do we immediately think of when we think of a pumpkin? More and more they are part of our Halloween decorations, which of course is fine, but in so many households the precious flesh, that delicious orange filling, goes straight into the bin without a second thought.
Brace yourself for this but in 2014, 80,000 tonnes of pumpkin flesh went to landfill.
80,000 tonnes when people are struggling to feed their children.
80,000 tonnes when we know children across the globe are dying, malnourished and weak.
80,000 tonnes when some older people are having to choose between eating and heating. 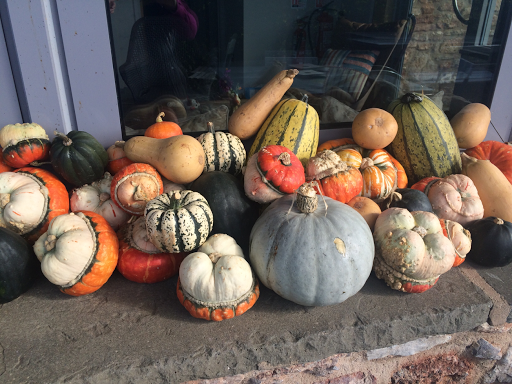 I deeply believe this is wrong. The core of my being screams when I hear these things and yet it continues. The supermarkets are as guilty as anyone, often selling the fruits as a carving kit, as if it isn't food and with very little information about what else you can do with a pumpkin but carve it.
And as a nation we aren't used to cooking pumpkins and squash, with some people not having a clue how to prepare it, how to cook it or just what a great ingredient it is for so many dishes. And whereas we have books that relate to gluts of apples and the pumpkins cousin, the courgette, as yet a pumpkin and squash book is yet to appear. 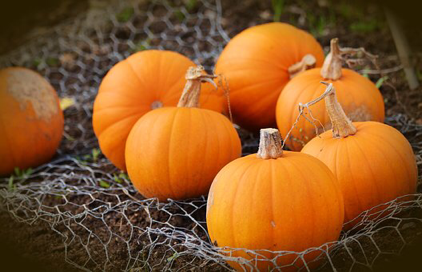 So what to do about this enormous waste?
Well this is just little old me but I'm going to try to blog as many pumpkin recipes as I can in the next few weeks in the lead up to Halloween and I ask you to join in. Share and cook the recipes, post recipes and photos of what you're cooking with your pumpkins and squash and be prepared to talk to people about the horror of this waste.
My first recipe is pumpkin and chilli soup which is the easiest recipe ever!!
Grab a pumpkin, peel and deseed it and chop it into pieces approx 1" in size. Pop the flesh into a roasting dish and roast for around 40-45 minutes or until soft, covered just with a sprinkling of olive oil and some salt and pepper.
In the meantime fry one onion and a chilli, chopped and deseeded if you don't want too much kick, and when your pumpkin is cooked, put it and your onion and chilli mix into a bowl. Add some stock, and blitz with a hand blender until smooth. And that is it!!
Serve with a dollop of sour cream, and with a few of the pumpkin seeds, toasted, scattered on top.
And if there's loads left over, it freezes really well. 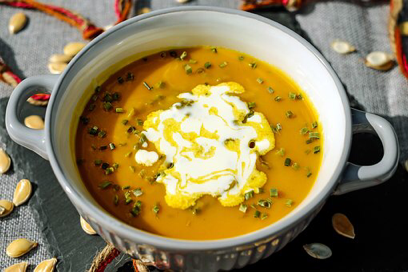