Those of you who follow me on social media or regularly read this blog will be aware of the ongoing work going on to put a bus only road through our allotments at Stapleton in Bristol. The year has been long, sad and felt fairly unproductive as the site has and continues to feel unwelcoming and difficult.
Still we have to show a key, now for a long lost lock, to gain access through fencing from a security guard who is on duty 24/7.
Still we arrive to find that there are constantly security dogs on site, which on a personal level makes me constantly anxious whilst there.
There are machines digging and moving things about and now the plots at the far end of the site, the ones that will be lost forever despite the love and attention given them by their tenants for, in some cases, longer than I have been alive, have been given a date to vacate and will finally be moving to the new sites that are located on what was  Feed Bristol's wonderful wildflower meadow.
Being at the plot has felt stressful and caused anxiety and although we have tried to make it business as usual a lot of plots have been left untended, or not as well tended as usual. It has taken a huge mental effort to go there since the occupation of the trees, and it's hard walking around the site and remembering those brave souls who fought so hard not just to save that land but also to create a wonderful if temporary community on our site. To this day and forever I will thank them for their bravery and for standing up for our land in the face of cold, wet winter and foregoing their personal comfort to do so.
But I have gone. And some things have been planted and some crops have appeared, mainly through their own determination to survive than anything that I have really done. The beetroots and chard, sorrel, spinach, potatoes, kale and herbs have flourished despite the sadness and we have cropped and eaten them as we would every year, but in all honesty they haven't brought their usual joy. They are a constant reminder of what was and what will soon be gone.
But we move on and plans are beginning to become clear as to what must be done to move this sad and sorry place forwards. Plans for more flowers, new and bigger beds and a possible polytunnel are alive and running in my head. The area at the far end, left to nettles this year in order that the destruction of the wild flower meadow couldn't be seen from the plot, needs to be addressed now that there is a path and new allotments at that end rather than wildlife rich hedge and meadow. Dead trees that are at the end and were a part of the hedge, now need felling and a new area will appear for, as yet, I know not what. Perhaps a wildlife area to in some tiny way, make up for the loss of those trees, those wildflowers......
What this year has really made me realise is that my mental health has been directly affected by the state of the site and the destruction of the land. Half way through the occupation, when fences had gone up and security were brought in, depression hit in a way it does only rarely, knocking me into a deep and dark abyss that saw me having to stop.
Stop to let the dust in my head settle.
Stop take in what was really happening to that precious piece of land.
Rarely has a visit to the plot this year not seen tears as I so desperately needed to be there despite the destruction feeling that it was pulling me apart. And recently that deep abyss has been threatening to re-open as the time comes closer and closer to those plots being forever sealed under tarmac for a bus only route that is already reneging on it's promises.
I don't share this lightly. But I share this in the hope that people, whoever they are, and whatever their link might be to growing, the land or food, might realise that us allotment holders don't just grow food.
It's not just a little hobby.
For many it's about sanctuary.
For many it's about health and well being.
For many it's about a connection with the earth and the seasons.
But for all of us it's about a connection to that piece of land, that precious piece of earth that we call our plot. 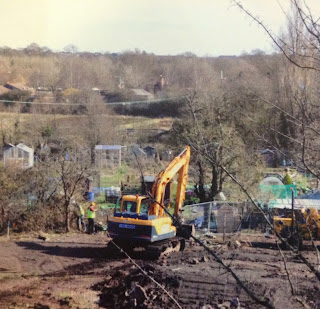 My plot can be seen here on the left with the greenhouse-that hedge is now tarmac. 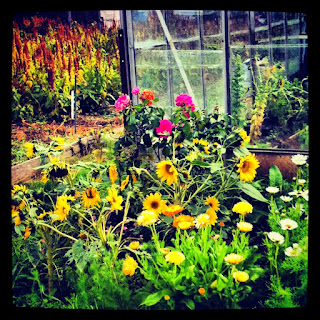 Flowers in the first year I had the plot-before the chaos began.